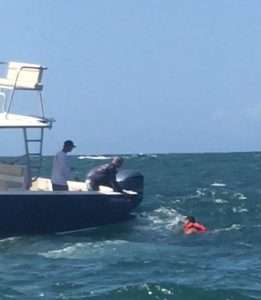 The Royal Grenada Police Force is currently investigating the circumstances that resulted in a Venezuelan national having to be rescued at sea.

The RGPF confirms that on Friday 17th May, 2019, a call was received from the crew of a vessel travelling from Trinidad and Tobago to St. Lucia, in which it was reported that a man was rescued from the sea, in the waters between Trinidad and Grenada.

In accordance with the humanitarian provisions of international conventions governing the rescue of distressed persons at sea, priority was given to providing medical treatment for the rescued man, who was determined to be in need of urgent medical attention.

He was therefore taken to the General Hospital in Grenada for medical care and was later identified as a Venezuelan national.

The RGPF further confirms that while warded at the General Hospital for continued medical observation, the rescued man left the hospital without the authorisation of the relevant authority.