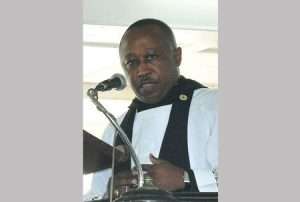 barbadostoday.bb- The priest who allegedly leaked the answers for an exam paper to scores of Barbados Community College (BCC) students, has been temporarily suspended from his pastoral duties in the Anglican Church.

This morning, Bishop Michael Maxwell told members of the media that Reverend Reginald Knight, an assistant priest at the St Peter’s Parish Church, would be investigated over his alleged actions.

“I have called for a pastoral committee meeting that deals with these sort of issues to review the situation, and they are supposed to meet on Monday the 3rd of June.

“This is because I am going to go off tomorrow to the Provincial Synod in Trinidad. On my return, I will be meeting with the pastoral committee in order to review this particular situation. He has been asked to take temporary leave from all priestly duties at present, until the meeting of the pastoral committee. This is the due process that we normally take for an incident like this,” Bishop Maxwell said.

It was back on May 14 when the CORE 101 Ethics and Citizenship examination was halted at the last minute after a breach in examination regulations.

Approximately 600 students were expected to write the exam.

Knight, a part time tutor was said to have leaked both the examination’s questions and responses via social media sparking a strong outcry from students.

“So, the investigation is not quite finished but once we have made a decision, I would be relaying them to people,” Alleyne said.

In another section of the media, Reverend Knight said he had tendered his resignation as a part-time tutor.

He said that the leak was a mistake, and noted that he apologised to the principal and the registrar.