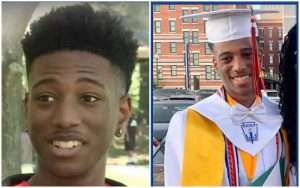 (NBC NEWS) — A Tennessee teenager received more than $3 million in college scholarships and graduated as his high school’s valedictorian all while being homeless.

On Sunday, Tupac Moseley, 17, of Memphis, Tennessee, graduated from Raleigh Egypt High School with a 4.3 GPA, having been accepted to 44 colleges.

“Never let your current situation, whatever circumstances you’re going through, be a mountain that you can’t climb,” he said during his graduation speech.

In an interview with NBC News, Moseley said that his family was thrust into a difficult financial situation following his father’s death in April 2017. They fell behind on bills and their home was foreclosed on in February, leaving them suddenly without a place to live.

He said that becoming homeless changed everything, and made focusing on school, college essays and scholarship applications that much more difficult.

“It affected my ability to write,” Moseley said. “I procrastinated a lot.”

He attributes his ability to finish all of his school work and applications to his positive, forward-thinking mindset and to the strong support system he had behind him.

“The family I’ve bonded with at school has been my main motivator,” Moseley said.

After hearing about his dire living situation, a local organization, For The Kingdom, stepped in and provided a cabin for Moseley to live in with his family. With a place to live, he was able to return his full focus to his studies.

Moseley said he was unaware he had received more than $3 million in college scholarships until his graduation ceremony Sunday.

“[I was] beyond astonished and shocked to hear that number,” he added.

However, others were less shocked to witness the hardworking teen’s incredible accomplishments.