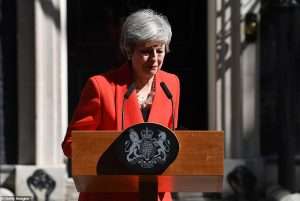 dailymail.co.uk-Tearful Theresa May finally bowed to the inevitable and called time on her troubled premiership today – after a massive Tory mutiny over her Brexit plans.

Watched by husband Philip, the Prime Minister was overcome by emotion on the steps of Downing Street as she admitted her desperate struggle to get the UK out of the EU will end in failure.

‘I’ve done my best,’ she said. ‘I have done everything I can to convince MPs to back that deal … sadly I have not been able to do so.

‘It is and will always remain a matter of deep regret to me that I have not been able to deliver Brexit.’

Mrs May was almost unable to continue as she was overtaken by tears while voicing her pride at having served the country. She declared she will resign as Conservative leader on June 7, triggering a contest that should be complete by the end of July.

Mrs May said it had been the ‘honour of my life’ to be PM, and she hoped she would not be the last woman to lead the country. In a parting shot at the bitter Brexit divisions that have blighted her time in office, she urged MPs from all parties to remember that ‘compromise is not a dirty word’.

Having delivered her painful message, she then hurried back through the famous black No10 doors and was immediately whisked away via the back exit.

The dramatic move comes after Mrs May’s last-ditch effort to get her EU deal through the Commons backfired spectacularly. Tories were up in arms and the Cabinet mounted an open revolt after she offered MPs a vote on holding a second referendum and joining a temporary customs union with the EU.

The PM humiliatingly pulled her Withdrawal Agreement Bill – known as WAB – yesterday after accepting the reality of her demise.

Sir Graham Brady, the chair of the powerful Tory 1922 committee, met her in No10 this morning. He had been instructed by Tory backbenchers to enforce an exit date if Mrs May refused to volunteer one, with MPs threatening to change party rules to allow a fresh no-confidence vote.

Jeremy Corbyn immediately seized on the news to demand a general election, saying the Conservatives were ‘divided and disintegrating’.

Boris Johnson also kicked off the Tory leadership battle by declaring that the UK should leave the EU on October 31 ‘deal or no deal’ – while Jeremy Hunt confirmed he will be a candidate.

But despite the brutal assault on her position from her own side, there was an outpouring of sympathy today after Mrs May finally fell on her sword.

Mr Johnson paid tribute to her ‘stoical service to our country’, urging politicians to ‘follow her urgings’ by ‘coming together to deliver Brexit’.

Andrea Leadsom, whose resignation as Commons Leader put the final nail in Mrs May’s political coffin, tweeted: ‘A very dignified speech by @theresa_may. An illustration of her total commitment to country and duty. She did her utmost, and I wish her all the very best.’

David Cameron also weighed in, describing it as a ‘strong and brave speech’.

Last night the PM chose to stay at her constituency home in Berkshire mulling her exit strategy with her husband Philip – who was yesterday urged by Brexiteers to tell his wife her time is up. However, she is thought to have made up her mind up to quit earlier this week.

Mrs May returned to Downing Street just before 9am, where she met her closest aides, including chief of staff Gavin Barwell director of communications Robbie Gibb, and political secretary Stephen Parkison.

They went through the text of her momentous statement – which was drafted by her young speechwriter Keelan Carr, who wrote the well-received address to Tory conference last year.

Aides said Mrs May showed few nerves before stepping out to deliver the words. ‘She tends not to show nerves,’ one told MailOnline. ‘She has been doing this for a very long time, she is a pro.’

After she had done the deed, Mrs May was clapped back into No10 by staff who had gathered in the entrance hall. She was heard expressing regret that she had been overcome by emotion. But one aide said the show of tears should be ‘one in the eye for the Maybot reputation’. ‘It has always been a nonsense,’ the source told MailOnline.

Mrs May then made a speech to a room of special advisers, thanking them for their hard work over the past few years. And she paid tribute in particular to her ‘rock’ Philip May.

An aide who was there said: ‘She held it together quite well but at the end when she was thanking Philip she was a bit tearful.’

Mrs May apparently welled up when she said of her time in office, ‘it’s been a journey’.