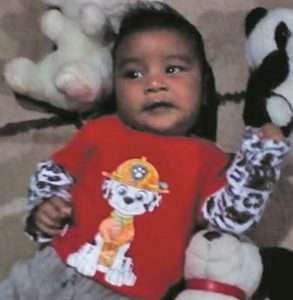 GUYANA TIMES — A nine-month-old baby was found death in a wash tub at Looknaut Street, D’Edward Village, West Coast Berbice, after he was left unattended as his teen mother slept.

Reports are the toddle reportedly crept to the bathroom which is situated outside the house and fell into the tub of clothes.

The child’s body was found by his grandmother, Surojdai Trim, called “Navita”.

According to the grandmother, she left the 15-year-old mother and her child in the lower flat and went to take a nap.

According to the grandmother, her daughter was lying in a chair and the child was playing on the floor. She related that about 30 minutes later, she awoke and saw her daughter asleep but did not see her grandchild.

“I pull him out and start to shake him up and do everything that I know,” the grieving grandmother related. She said she raised an alarm and her daughter woke up and a neighbour rushed over to help.

Trim said she was advised to put the child down and call the Police.

“They tell me that the child dead, don’t do anything,” she related.

Guyana Times was told that the Police arrived several minutes later and the baby was taken to the hospital where he was pronounced dead on arrival.

Meanwhile, the 15-year-old mother related that she had no knowledge of what transpired since she fell asleep.

The baby’s 18-year-old father lives a few villages away and broke down in tears when he received the news that his child had died.

Police are investigating the matter.