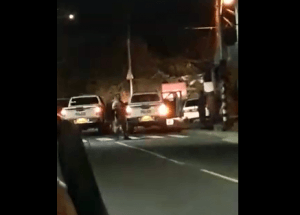 stlucianewsonline.com- Residents reported hearing a barrage of gunshots from automatic or semi-automatic firearms around 10:30 p.m. Wednesday, May 22.

Shortly after the sounds subsided and the ‘smoke cleared’, a 17-year-old, believed to be from La Clery, Castries is killed on the spot, a 28-year-old Bois Patat, Castries man injured and his 19-year-old brother in custody.

The shooting occurred following an alleged chase and shootout between the police and individual/s on board a white car, according to sources.

The police were reportedly acting on a tip that a white car with potentially armed suspects on board, a source said.

The chase ended at the junction of Chaussee Road and La Pansee, in the vicinity of the Anglican school, with the shootout.

Curious onlookers were kept at a distance while they carried out their investigations.