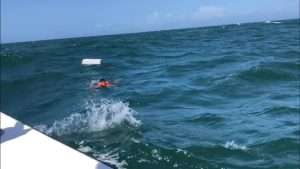 newsday.co.tt- VENEZUELAN Alberto Abrero was rescued by a US businessmen and taken to Grenada after the pirogue he and 20 other were on sank en route to TT.

According to Grenadian sources, Abrero was taken there on Thursday after he was found drifting in the sea off Chaguaramas. On his Facebook page Robert Richards, the businessman who lives in the US Virgin Islands and is originally from Pennsylvania, said he and his crew found Abrero.

He posted on his Facebook page accompanied with photographs: “We found this young man 30 miles offshore of Trinidad in some sporty sea conditions fighting for his life, he had been in the water for 19 hours, while we were bringing our new boats back. He was on a boat that sunk the night before with 20 other people on board, so far no other survivors, they were on their way to Trinidad to buy food because there home of Isla De Margarita a Venezuela island has limited food that’s very expensive, it’s a very sad thing going on there GOD bless the lost ones !”

This is the second boat that recently got into difficulties resulting in deaths with Venezuelans attempting to come to TT. In April, 11 of 34 people, mostly women, were rescued after the boat they were on sank.

The ten metre long pirogue overturned and sank near Patos Island, near the Dragon’s Mouth on April 23.

It was reported that 25 named people and nine unnamed people boarded a pirogue B/P JHONNALY JOSE at Las Salinas in Güiria. On the voyage the overloaded boat experienced engine failure and sank.

TT is one of many destinations for Venezuelans fleeing economic hardships.

There have been mixed responses from citizens about their arrival, forcing the government introduce a registration of all Venezuelans in the country. With a proposed budget of $5 million, Cabinet has officially approved the registration of Venezuelans which would allow them to stay and work in TT for one year. National Security Minister Stuart Young, who is said to be out of the country, told reporters at post Cabinet media briefing on April 11 that registration is scheduled to begin on May 31 and end on June 14.

He added there would be five designated offices across the country for the registration period, including in Cedros and Tobago. He said to register they must provide proof they are from Venezuela and other information including an address.

He said authorities would work with Interpol and authorities in Venezuela while doing background checks and may deport people if they are not truthful. Documented and undocumented Venezuelan immigrants including those at the Immigration Detention Centre have been asked to register.