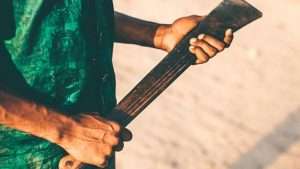 loopjamaica.com- The Trelawny police on Saturday night shot and killed a man who is said to be of unsound mind during a reported confrontation after he had earlier used a machete to chop his mother and five-year-old nephew to death at their home in the parish.

The deceased have been identified as domestic helper, Esmerelda Gordon; her son, Leon White; and Levon Walker, five, all of a Martha Brae, Trelawny address.

Preliminary reports reaching Loop News are that about 11:30 p.m., citizens heard cries for help coming from a house in Martha Brae, and alerted the police.

Upon the arrival of law enforcers at the home, the alleged aggressor was shot and killed after he reportedly attacked the security team with a machete.

The three injured persons were taken to a hospital, where they were all pronounced dead.

The Trelawny police are investigating the development.