Are We Sure The Warriors Aren’t Better Without Kevin Durant 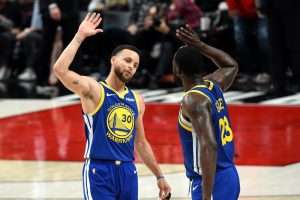 sbnation.com – Everyone keeps saying that it’s absurd to claim that the Warriors are better with Kevin Durant. This makes a lot of sense: Durant is one of the best players in the world, and the Warriors have won the past two NBA championships with him while losing the NBA Finals the year prior to his arrival. Durant was the MVP of the Finals in each of the past two years. Over the past two seasons, Durant has been the best player on the Warriors.

But then how do we explain why the Warriors were 7-4 with Durant this postseason and are 4-0 without him, including Saturday’s Game 3 in Portland to go up 3-0 on the Blazers?

Are we absolutely sure the Warriors aren’t better without KD?

Draymond Green has been incredible lately, and did it again on Saturday. Stephen Curry was excellent, too. The Warriors miss Durant in very specific ways (especially when possessions break down) but also thrive in his absence in very specific ways. Portland doesn’t have a wing scorer to require Durant’s long, agile defense. Thompson and even Curry are doing outstanding jobs making life difficult for the exhausted Damian Lillard and C.J. McCollum, and not having Jusuf Nurkic hurts the Blazers even more in this series than in the prior two.

It’s probably just a confluence of factors making the Warriors look like a revelation just one win from a fifth straight NBA Finals: Blazers injury and wear, Green’s ecstatic performance, a hot stretch for Curry. Perhaps with Durant the Warriors would be not just winning these games, but winning them in blowouts.

But we can’t rule out completely that the Original Warriors are feeling themselves in the absence of KD, knowing that he’s been flirting with an offseason exit all year and preparing for life without him for real. Maybe they just want to remind us all — and most especially the other teams in the NBA — that even if Durant does leave they are still the champions until someone says otherwise.