Guyanese Husband Confesses To shooting Wife In The Head, Burn And Bury Body 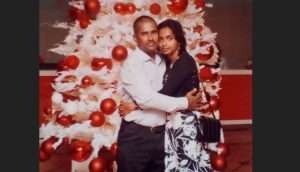 (NEWS ROOM GUYANA) West Demarara pump attendant Ryan Sugrim has confessed to Police that he killed his ex-wife and buried her body in the compound of the gas station where he worked at Crane, West Coast Demerara.

A post-mortem Wednesday confirmed that the woman died of a gunshot wound to the head.

Her brother, Akbar Haniff, told the News Room that his sister’s body was burnt beyond recognition before she was placed in the shallow grave.

“The victim’s estranged husband who is in police custody, has since admitted having committed the gruesome act and is cooperating with investigators,” Police headquarters said Wednesday.

The woman had separated from Sugrim eight months ago after enduring years of abuse. She cared for three of their children while Sugrim had two.

On Saturday, he picked her up to see one of her sons, who had an upcoming birthday. She was never seen alive after.

After her relatives filed a report, Sugrim was arrested Monday and told Police where to find the body.