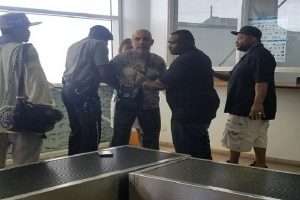 BASSETERRE, St Kitts (CMC) – A Greek billionaire and heir to the Coca-Cola fortune remained in police custody here yesterday after making an appearance in court following his arrest on drug-related charges last Thursday.

Alkiviades “Alki” David, 50, was arrested by the Anti-Narcotics Unit at the Robert L Bradshaw International Airport after a search of his private jet uncovered more than EC$1.3 million worth of cannabis on board.

David was charged for possession with intent to supply, possession of controlled drugs and importation of a controlled drug, was originally released on EC$30,000 cash bail and ordered to surrender all his travel documents and report to a police station daily.

But following his court appearance on Tuesday, his bail was increased to EC$300,000 and bail conditions changed due to new evidence submitted by the police.

The media were barred from entering the court building and some media houses here are reporting that David’s lawyers were seeking an urgent sitting of the High Court.

During a news conference on Monday, David claimed the plants on board his private aircraft were “all hemp” and were intended for a new venture to start a legal cannabis business in the region.

He and Chase Ergen, the heir to a satellite fortune, announced in April that they formed a consortium aimed at developing the cannabis business in St Kitts-Nevis, Dominica and Antigua and Barbuda.

A government statement issued here yesterday said several citizens were upset at the tone of David during the news conference saying that “over the last several hours launched a damning and disrespectful attack on the country’s Prime Minister Dr Timothy Harris.

The statement quoted Prime Minister Harris as saying recently that “non-nationals would not be permitted to secure advantages over nationals of our federation as we set about to build out a marijuana industry”.