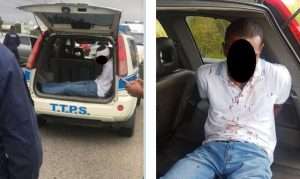 trinidadexpress.com- A woman was stabbed multiple times during a vicious fight on the Churchill Roosevelt Highway in Aranguez on Monday afternoon, during a road rage incident that has shocked the nation.

Several people recorded the incident and shared it on social media.

Police have detained the man seen on video stabbing the woman.

TTPS Road Safety Coordinator Brent Batson Brent Batson said that police were patrolling nearby at the time of the incident and a suspect was detained at the scene.

The suspect was taken to the Barataria Police Station and expected to be charged with wounding with intent and injuring persons by furious driving according to Section 26 Offences Against the person Act.

That section states: (1) Any person, having the charge of any vehicle, who, by wanton or furious driving, or other wilful misconduct, or by wilful neglect, does or causes to be done any bodily harm to any person whatsoever, is liable to imprisonment for four years.

The videos show the two vehicles disabled and parked on the highway after crashing and two men and a woman in a tussle as vehicles drive by.

A man is seen with a large knife attempting to stab the other man in the chest as he falls backward, pitching an object out of his hand.

The woman races behind and tackles the man with the knife, who then turns on her and stabs her in the arm.

Her companion beats the armed man on the head with an object until he releases the woman.

Motorists stopped and assisted the injured woman, and were seen on their phones calling for help.

It is uncertain how the fight escalated to weapons being used and who was the aggressor.

Highway Patrol officers responded and intend to use the videos as evidence.

The man taken into custody was treated at the scene for a head injury before being taken to the police station.