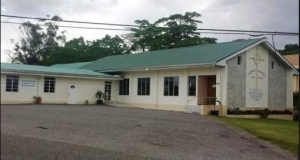 jamaicaobserver.com- One man has been hospitalised following an early morning robbery attempt at Andrew Memorial United Curch in Mandeville yesterday.

The Jamaica Observer learnt that shortly after 3:00 am four men broke into the church by smashing glass windows. The church’s alarm system alerted their security provider and a team was dispatched. On their arrival, four men were seen on the church property. One of the intruders was shot and injured during a confrontation with the security team. The other three men escaped.

The injured man was taken to Mandeville Regional Hospital where he has been admitted under police guard.

Acting commander for the Manchester police, Superintendent David White, confirmed the incident. He said the police were only aware of one man attempting to rob the church. However, senior church officials had stated that four men broke into the church with one being caught and the others escaping.

Meanwhile, a church member, Rupert Thomas, said he was disheartened by the brazen robbery attempt as the church serves the community.

“I am really feeling it hard to know that the church, which serves the community, could be broken into. The fact that people could be so brazen. Even with an alarm system on the church and yet them come in and mash up the place like that. I am really disheartened. People are heartless,” he said.

“This is the Lord’s house, and it is the Lord that gave them the strength and this is what they are using it for. We are distressed, and we feel it as a church, as we are trying to make an impact in the community and yet people are coming to rob the church. We leave them in the hands of the Lord,” Thomas said.

“I am sorry they didn’t catch all of them,” he added.