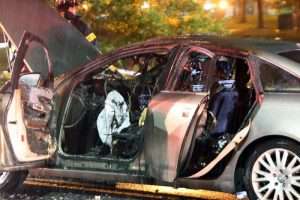 NEW YORK DAILY NEWS –The mother of a little Queens girl burned alive in a car with its doors chained shut said Monday that the words she heard from the tot’s deranged father before the crime are forever etched in her mind:

“I always thought he was going to hurt me,” said Cherone Coleman, 36, who spoke to the Daily News surrounded by family as she seesawed between grief and anger.

“I never thought he was going to hurt my daughter,” Coleman said.

“My daughter was perfect. She was loving, always smiling, and oh so caring,” said the grieving mom. “She was my only child, and I can’t have any more.”

On Sunday night, cops and firefighters pulled her badly-burned 3-year-old girl, Zoey, from a charred Audi in Springfield Gardens, just blocks from where Coleman and her only child lived.

Coleman told The News that the girl’s vindictive dad, Martin Pereira, had become unhinged in recent weeks as they battled over Zoey’s custody. Coleman said she had gone to court to modify their visitation agreement, but a judge denied her request.

Against her wishes, but with the court’s blessing, she said, Pereira left with the girl for a weekend visit on Saturday and Sunday. It was only the second time he had been entrusted with Zoey since she and Pereira broke up, Coleman said.

On Monday, Coleman said she wished she had disobeyed the judge’s order. “I should’ve just kept her and gone to jail,” she said.

Coleman said the nightmare began Saturday, when Pereira took Zoey to Cohen Children’s Medical Center in New Hyde Park and claimed to its staff that Coleman had abused the child.

“He was calling me a drug dealer and a drug addict,” Coleman said.

Coleman denied being an abuser — but nonetheless, she said, the hospital staff let Pereira continue spending the weekend with their daughter. “They let him leave with her because he had all the paperwork stating he had visitation,” Coleman said.

On Sunday morning, Coleman said, Pereira repeatedly dialed her phone — but she wouldn’t take his calls.

Finally, he called a relative, who then called her. Coleman said she finally spoke with Pereira later on Sunday.

Coleman said she then called 911 in a panic to report she had argued with her ex and she feared he was going to harm himself and their daughter.

The phone calls were just a prelude to the horror that unfolded on Sunday night.

That’s when Zoey died in in the back of her father’s flame-engulfed Audi, on Baisley Blvd. at 154th St., near Baisley Pond Park.

The doors to the car were chained shut as bright orange flames roared in the passenger compartment, said witnesses.

Pereira’s clothes were on fire as someone in the neighborhood urged him to run into nearby Baisley Pond. A passerby brought Pereira a blanket to help douse his flaming clothes.

“I have my kid in the car,” the father said, prompting the good Samaritan to call 911, sources said.

The fire was so hot, the car door handles securing the chains melted, enabling rescuers to get inside. They rushed Zoey to Jamaica Hospital in a police vehicle, but she could not be saved.

First responders found two gasoline canisters in the car, and a propane tank in the trunk, sources said.

Cops found Pereira in the park. They took him to New York Presbyterian Hospital/Weill Cornell Medical Center in Manhattan, where he was being treated Monday for burns. As of Monday evening, he was in police custody at the hospital, but he had not been charged.

“He’s the fu—ing devil,” Coleman said. “He’s the devil. His family is responsible too. They have called ACS on me so many times with so many lies.” Whipsawed by emotion during an interview, Coleman said at one point she wished Pereira dead.

“I wish I could torture him and kill him. I can’t imagine the pain my baby went through. She was burned terribly, her bones were out and he ran off and left her to burn to death. Why would he do this to my daughter to get to me? It doesn’t make sense.”

But moments later, she thought better of wishing her ex-lover would die.

“I want him to live, and suffer for what he did to my daughter,” said Coleman, a medical assistant at Jamaica Estates Medical Center. Pereira has three prior arrests, sources said. Two are sealed. The third is for aggravated harassment and stems from phone calls he made in 2013, the sources said.

Pereira’s Facebook page is devoted almost entirely to pictures of Zoey. He most recently updated his cover photo with a sweet picture of Zoey just hours before the car fire.

One happy photo from October 2017 shows Pereira with Zoey and her mom. “I love us,” a banner across the picture reads.