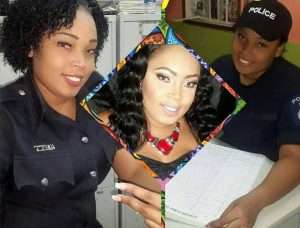 trinidadexpress.com- A POLICE officer remained in critical condition at hospital after she was doused with a flammable liquid and then set on fire during a domestic dispute yesterday morning.

Her boyfriend, a 33-year-old member of the Trinidad and Tobago Coast Guard, was arrested shortly after and was in police custody up to last night assisting officers with their investigations.

Investigators said the officer, 29-year-old Kelly Ann Humphrey, and the man had a verbal argument which soon became physical when the man doused her with the liquid and set her ablaze before fleeing the scene.

The officer, who was attached to Police Administration Guard Unit, screamed out for help and was assisted by neighbours who came to her aid and later transported her to Eric Williams Medical Sciences Complex at Mount Hope.

As detectives were at the scene conducting enquiries, the suspect returned to the location and was immediately detained and taken to San Juan Police Station for questioning.

He is currently facing a charge of attempted murder, said police.