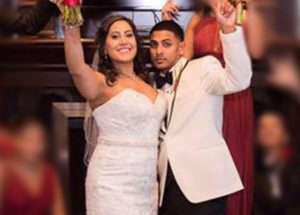 trinidadexpress.com- The Guyanese man who stabbed to death his nine-month pregnant Trinidadian wife, at their home in Pickering, Canada, back in 2017 has been sentenced to life in prison with no chance of parole for 17 years.

Nicholas Baig, 27, pleaded guilty to second-degree murder of Arianna Goberdhan earlier this year. The charge carries an automatic life sentence with no chance of parole for 10 to 25 years under the Criminal Code.

During a sentencing hearing in an Oshawa courtroom on Thursday, Ontario Superior Court Justice Jocelyn Speyer ordered that Baig serve at least 17 years in prison. She cited Baig’s guilty plea and the “senseless act of cruelty” as reasons for her decision.

But Goberdhan’s mother, Sherry Goberdhan, said she was not pleased.

Goberdhan is now demanding justice for her unborn grandchild.

“My granddaughter and my daughter were murdered but the murderer was charged with one count of murder. We are being told that Canadian law states that an unborn child is not recognised as a human being. But she was nine months, days away from being born. I saw my grandchild and she was perfect lying in her mother’s arms. For this law to say my granddaughter was not a human being is so wrong. I am not going to stop until someone is held responsible for my grandchild’s death,” she said.

Goberdhan, together with friends and family, has launched a petition to change the law and recognize the life of her unborn granddaughter.

Arianna Goberdhan, 27, was nine-months pregnant with what would have been her first child when she was found dead in April 2017.

Her unborn baby, who Goberdhan planned to name Asaara, did not survive.

The couple was married for six months before Baig was charged with Goberdhan’s slaying.

Sherry Goberdhan recalled that moment, “I remember the police called us. I thought she had gone into labour somewhere. I was told my daughter was killed.”

She said her daughter was excited about the birth of her baby girl.

“And so was I. I went to every ultrasound with her. I would talk to my daughter’s tummy. “Nani is waiting to hold you” I would say to the baby. My daughter took good care of herself because she wanted the baby to per perfect,” she said.

Court documents showed the couple had separated four months before Goberdhan was killed. She had moved into her parents’ house in Ajax because she and Baig “were not getting along.” Despite that, she would periodically visit Baig, according to an agreed statement of facts read in court.

Their relationship continued to deteriorate, the court heard, the extent of which was captured in a series of “vile” text messages Baig sent to his estranged wife.

One text submitted as evidence in the case read: “I’ve never wished death on anyone before I hope to God you stop breathing while you drive. I really don’t want to be married to you.”

Goberdhan was remembered as a joy to be around, a woman full of life.