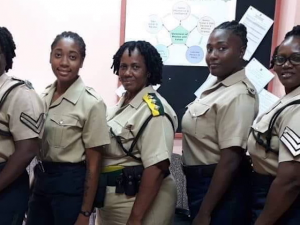 BELMOPAN, Belize, CMC – The attorney representing several policewomen facing disciplinary charges after failing to remove their dreadlocks hairstyles says her clients were not in breach of the law.

“The rules say no elaborate head decorations or extensions. If you read the rules in its full context it is clear what it was intended to target is additions to your hair. This is not an addition. This is a particular hairstyle,” said attorney Leslie Mendez

“In our mind, they have not been able to justify that in any way. What it is it’s an enforcement of a particular interpretation of the rules which is now saying that head decorations are considered to be locks and are now in breach of the dress code at the police department,” she added.

The six police officers, including a senior member of the Belize Police Department, have been accused of willfully disobeying a lawful command from Commissioner of Police Chester Williams.

The women had been instructed to remove their dreadlocks hairstyles, which the department says violates section 7 of the Standing Orders.

Mendez is representing at least three of the policewomen and she has written to Commissioner Williams, stating that his request to have them remove their dreadlock hairstyle is unlawful.

In the letter, Mendez tells Williams that there is no legitimate reason to justify the ban on dreadlocks at the Police Department.

“Over a period of time, the senior command has been meeting with them, giving them an opportunity to remove the hairstyle. Two of them did the right thing and removed it. We have six of them who are adamant who will not take them out.

But Mendez insists that the authorities have misinterpreted the existing rules.

Commissioner Williams told the media via WhatsApp that having discussed the matter with his senior management team it was decided that the matter will be submitted to the Solicitor General for legal advice.

As a result, the disciplinary hearing against the women has been put on hold pending the advice.

“This is being done in the interest of fairness to the officers as well as to ensure the department does not incur unnecessary expense or waste time in court fighting something that may be able to resolve otherwise.”