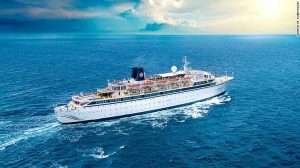 loopslu.com-Authorities in the eastern Caribbean island of St. Lucia have quarantined a cruise ship after discovering a confirmed case of measles aboard.

Dr. Merlene Fredericks-James, the island’s chief medical officer, told The Associated Press on Thursday that the ship is still in port and that no one has been allowed to leave it.

“One infected person can easily infect others,” she said in a public statement.

An official with St. Lucia’s Marine Police who declined to provide their name because they were not authorised to speak to the media identified the ship as Freewinds. The 440-foot ship reportedly belongs to the Church of Scientology.

An unidentified person who answered the phone at the church’s media center said no one was immediately available for comment.

The ship is normally docked in the Dutch Caribbean island of Curacao and serves as a religious retreat, according to the church’s website.

St. Lucia authorities did not immediately provide an update on the person aboard who contracted measles. Symptoms include runny nose, fever and a red-spotted rash. Most people recover, but measles can lead to pneumonia, brain swelling and even death in some cases.

Measles has sickened more than 700 people in 22 US states this year, with federal officials saying the resurgence is driven by misinformation about vaccines.