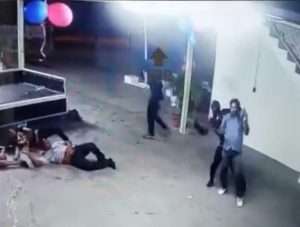 trinidadexpress.com- Central division police are searching for five men were terrorised guests at a birthday party in Freeport on Sunday morning.

Police said five men entered the home where about a dozen people were liming at around 3am.

The family, who live at Arena Road, have asked not to be identified.

Police said the men, armed with firearms and cutlasses, stormed into the party threatening to kill.

A woman, who was celebrating her birthday, and two men were beaten by the gunmen.

The men were dragged around on the floor.

A little girl who walked outside was ordered to return indoors.

A 55-inch television was taken from inside the house.

The guests were robbed of their cellphones, cash and jewellery.