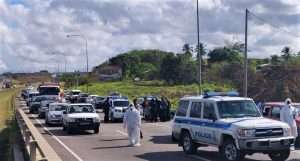 trinidadexpress.com- The bodies of two women and a man were found in a pick up van parked on the south-bound shoulder of the Solomon Hochoy Highway, near Golconda early today.

A man walking to work at around 6.30a.m made the discovery.

Police say all three were shot and killed.

In the driver’s seat of the red Nissan Frontier (registration TCA-119) was the man. He had been shot in the left side of the face.

The man has been identified as George Junior Peter Contero, of Palmiste. He was 52-years-old.

A Indian woman who appears to be in her 50s was in the front passenger seat, with a wound to the right side of the face.

A younger woman, described as “Spanish” in the police report, was in the back seat. She had been shot in the head and chin.

The vehicle was found on the bridge spanning the Cipero River, between the Corinth overpass and the Goncolda interchange.