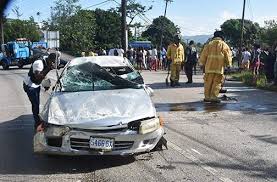 jamaicaobserver.com – In four days’ time  Junique Chung would have celebrated her 19th birthday.

“She was counting down the days,” Chung’s aunt, Rochelle Rochester, told the Jamaica Observer yesterday as she reflected on her niece’s jovial personality and stories she had shared about her activities at the gym, which she recently joined hoping to reach personal targets in anticipation of her big day.

Yesterday, however, those plans faded.

Chung was flung from the Nissan Tiida in which she was a passenger when it was reportedly rear-ended on the New Green main road, just outside the town of Mandeville. She sustained several injuries and was taken to hospital where she was pronounced dead.

Onlookers on the accident scene yesterday morning were alarmed as they saw the vehicle in two pieces.

Up to late yesterday, the driver of the Tiida and another passenger remained in hospital.

The driver, who relatives say is the father of Chung’s one-year-old daughter and an up-and-coming artiste, was reportedly in critical condition.

“We are just weeping and mourning,” Chung’s brother Mark Muthra told the Observer.

A member of a pageant committee at Christiana High School, where Chung’s partner, who goes by the name Fresh King, was a guest performer Saturday night, said that they too were in shock.

It is believed that the occupants of the Tiida were coming from the pageant when the accident occurred.

The driver of the Mitsubishi Lancer motor car, who was the only person in the vehicle, was treated in hospital and discharged.