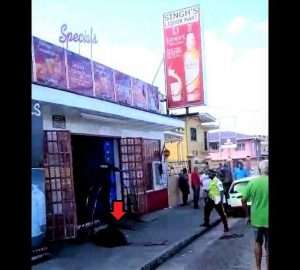 One of the suspects is believed to be a 14-year-old boy.

Police said the suspects entered Singh’s Liquor Mart at Bournes Road at around 8.20am.

They ordered that the owner hand over cash and other items.

Instead, he pulled out his licenced firearm and fired several shots at the two.

One man died onside the business. The other, believed to be the 14-year-old, died inside.

The bodies, which are yet to be identified, were removed to the Forensic Science Centre in St James.

The businessman’s firearm and Firearm User Licence has been taken by police for examination.