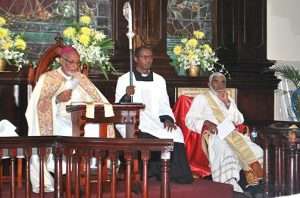 jamaicaobserver.com – As the debate on the legalisation of abortion in Jamaica continues to make the rounds, the Anglican Church here has made it clear that it supports the act, but only under specific circumstances.

Addressing the 149th Synod of the church in St James last week, Lord Bishop Howard Gregory said the country has not developed a culture of respectful dialogue on issues of this nature and urged all of society to work towards healthy debate.

In addressing is flock, he made particular reference to the fact that the church must affirm the sanctity of life in order to advance an understanding of the issue of abortion as it affects people and families.

Said he: “The church forbids abortion as a means of birth control, family planning, sex selection, or for any reason of mere convenience.”

He explained, however, that the Anglican Communion allows space for consideration of abortion under specific circumstances. These include “cases of rape or incest, cases in which a mother’s physical or mental health is at risk, or cases involving foetal abnormalities”.

It was the Church’s first definitive public statement on the issue.

Bishop Gregory went on to indicate that any decision towards abortion ought not to be taken lightly or without due empathy.

“At the same time, the church takes seriously the crucial role which a woman plays in the decision-making process, and who must be accorded due consideration and respect,” he said.

He told attendees at the start of the annual synod that the debate about the legal provisions for abortion must be undergirded by the Christian understanding of grace which comes from God.

Grace, he said, “does not begin with sin, as so many preach,” but as conveyed by St Paul, it begins with God’s love.

It is “not just about a word spoken or a law invoked, but an attitude and vantage point from which we approach human beings wrestling with the fundamental and complicated issues of life”.

Some 118 elected members of the synod, representing congregations from across the island and Cayman, as well as approximately 100 clergy and church workers met under the theme ‘Intentional Disciples: Instruments of Grace and Hope’ from April 23-26 at Holiday Inn Resort, Rose Hall.

Led by the lord bishop, the meetings included discussions on the state of the church, its impact on the nation at large, and social issues such as child abuse.

The head of the Anglican Church in Jamaica and the Cayman Islands cautioned against the taking of “emotional positions at extreme poles, and labelling those who differ from us as enemies, as we have done in politics”.

He said Christians must engage in conversation with a sense of humility, rather than arrogance, and avoid “the name calling which have been coming from some quarters”.

He said, too, that society has been less than compassionate to the countless generations of women who choose to have their babies under challenging circumstances.

Meanwhile, he mentioned that he was grateful for the end of the previous dispensation in which the societal “response was to give children the dishonourable status of illegitimate” when they were born to families some in society condemned, and noted that it took legislation, as being pursued with the issue of abortion, to right this wrong.

He added that, “these same mothers, who constitute a significant part of our congregations, can still only yearn for the day when they, like Lazarus (in the Bible), will be able to receive of the crumbs of the Lord’s table”.

In his charge to the nation, delivered at the Parish Church of St James, he challenged those who are “doctrinaire on the sanctity of life when the issue of abortion comes up”, but are supporters of capital punishment, to find consistency in their positions.