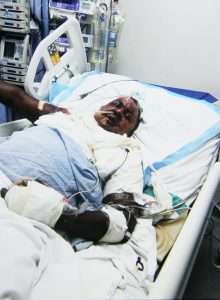 newsday.co.tt- What manner of man will douse his friend with rum, then set him on fire?

That is the question relatives of Raymond “Abba” La Fortune, 55, of Moruga, have been asking since the Easter Monday incident inside a bar.

The man who committed the heinous act had not been arrested up to yesterday, while Fortune is fighting for dear life in the Intensive Care Unit, San Fernando General Hospital (SFGH).

Police confirmed that La Fortune was drinking with friends in a bar at Penal Rock Road Junction, Basse Terre Village, when an argument started with other men at about 2.30 pm.

They said one of the men grabbed a bottle of puncheon rum from the bar table and flung the liquid in La Fortune’s face, and he fell backwards on the ground. The man then poured the rest of the rum over him – almost half a bottle.

In front of other customers at the bar, the other man then flicked a cigarette lighter and set La Fortune on fire.

La Fortune was engulfed in flames and ran outside screaming. Eyewitnesses told police La Fortune was slapping his face and chest to put out the fire, but his face, back of his neck and chest were badly burnt.

An ambulance took La Fortune to the Princes Town District Health Facility, where he was treated and transferred to SFGH.

La Fortune, a handyman, lives alone in a nearby village, Rock River. He has no wife nor children.

On Thursday, his sisters, Margaret La Fortune, 64, and Marlene Jointe, 44, visited him in the ICU, where he is being treated for first-degree burns.

Margaret told Newsday her brother is unable to speak properly and is in severe pain.

“His entire face was burnt, side of the neck and chest. He is in ICU but by the grace of God he is recovering.”

Attorney Shaun Teekasingh told Newsday La Fortune’s relatives have retained him to seek their interest, as five days have passed without anyone being arrested.

“They are very concerned about the pace of the investigation.

“This incident – of a man being doused with puncheon rum and set alight –happened inside of a bar in front of other patrons.

“Yet no one has been arrested. I intend to take up this matter on their behalf.”