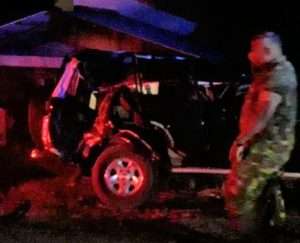 trinidadexpress.com- Police are investigating an incident in which four soldiers were injured in a vehicular crash early Tuesday in Moruga.

Police were told that the four soldiers dressed in camouflage fatigues were liming at a bar half an hour at before the crash.

A witness who wished to remain anonymous told reporters on Wednesday that the soldiers were drinking alcohol and liming with a woman at a bar at Bois Jean Jean.

The witness claimed the soldiers “roughed up” two men, and even discharged several rounds of a firearm into the air.

The witness also claimed that one of the soldiers said he lived at Laventille and was a “bad man”.

The soldiers left the bar around 3.30 a.m. and half an hour later their vehicle crashed into a fence at L’anse Mitan.

One of them was pinned in the vehicle.