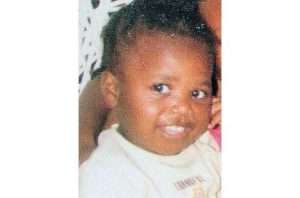 jamaicaobserver.com- A two-year-old child was killed and her 10-year-old sister injured after they were mowed down during an hit-and-run along the Howard Cooke Highway here, Tuesday evening.

The deceased has been identified as Sasha-Gay Dennis.

According to the distressed mother, Diana Whitely, tragedy struck soon after she left the Closed Harbour Beach, popularly called Dump Up beach, where she was having fun with her four children.

She recounted that she and her children waited at the side of the road until the traffic light changed to red, and was in the process of crossing the road when the two little girls were struck down by a motor car which came out of nowhere.

“Shadae held the baby’s hand. We stopped, and when the light changed to red we decided to cross when the car drove out of KFC and hit down the two of them,” the distraught mother recounted.

Whitely said that she shouted to the driver to inform him that the car was dragging the baby trapped underneath it, but her pleas fell on deaf ears.

“The two of them fell down but the baby dropped under the car. I shouted to the driver telling him the baby under the car,” she lamented. “When mi lift up Shadae (10-year-old daughter), her hands full of blood.”

The hit-and-run vehicle reportedly dragged the infant for about a distance of 200 yards before her battered body fell on the road.

Speaking with the Jamaica Observer at the Cornwall Regional Hospital yesterday, the distressed mother said she expects that her 10-year-old daughter will be released from hospital later today.

Reports from the Barnett Street police are that about 6:50 pm, Sasha-Gay and the other child were in the process of crossing the road when they were hit by a Nissan Note motor car. The driver of the car did not stop.

Both girls sustained multiple injuries and were taken to hospital where Sasha-Gay was pronounced dead and the other girl admitted for treatment.

Meanwhile, investigators are asking anyone with information to contact the Montego Bay police at 876-953-6191, police 119 emergency number or the nearest police station.