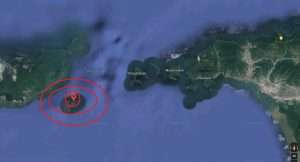 Trinidadexpress.com – THE Trinidad and Tobago Coast Guard was involved in the rescue of eight of the missing Venezuelan nationals, almost 24 hours after a boat overturned at sea en route to Trinidad.

Reports stated that the eight Venezuelans made it to an island known as Isla Los Patos, located near the Dragon’s Mouth.

The boat, which was overloaded, encountered engine problems 10 minutes into the journey.

The T&T Coast Guard stated that a report was received at around 11.40pm on Wednesday that a pirogue named B/P JHONNALY JOSE left Venezuela the previous day and overturned whilst at sea.

The release stated, “On the 25 April,2018 at 0834 hours, it was confirmed that twenty-five persons were on board the vessel with the last known position of the vessel as two (2) Nautical Miles (3.7 km) East of Patos Island, an island in the north-western Gulf of Paria and a part of the Bolivarian Republic of Venezuela.”

The T&T Coast Guard stated that four people were initially rescued and 21 were unaccounted for.

“This island is located within the Maritime Rescue Co-ordination Centre of Venezuela and as such it is their responsibility to coordinate search and rescue operations within that geographic area. However, the Trinidad and Tobago Coast Guard has been engaged and in accordance with the Trinidad and Tobago Coast Guard’s roles and responsibilities with regard to the International Convention for the Safety of Life at Sea (SOLAS) and International Convention on Maritime Search and Rescue (SAR) as well as our diplomatic links with the Bolivarian Republic of Venezuela, Trinidad and Tobago Coast Guard assets have already been actioned to aid in the search and rescue operation and further vessel deployments will be coordinated, once required,” the release stated.

Fishermen in Güiria are involved in the search.

The Express was told that the boat set sail off the port of Las Salinas, Guiria for the three and a half hour long journey to Trinidad.