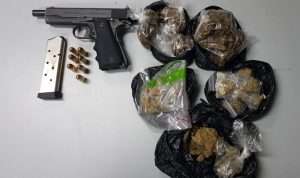 looptt.com- Police exercises in the Western Division led to the seizure of various weapons, including an AK-47 assault rifle, as well as a firearm which was found in a basketball court.

The finds were made in Maraval and Diego Martin between Easter Sunday and Easter Monday.

The assault rifle, which was loaded with 31 rounds of ammunition, was found and seized around 5:00 am on Monday. The weapon was said to have been found hidden under a car.

On Sunday morning, Task Force officers seized an American made tactical .45mm firearm near a basketball court in Petit Valley.

The weapon, which was loaded with seven rounds of  .45mm ammunition, was found and seized in a black plastic bag which was hidden in the basketball court.

PC Genty is continuing enquires into this matter.