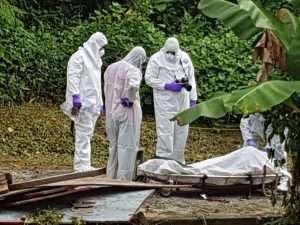 Trinidadexpress.com- A man dressed in what looked like a police uniform, shot and killed parlour owner Kevin Vain in St James on Monday night.

Also injured in the attack were Sherland Gunn, 39, Koel Ashton, 36 , and Jason Gonzales, 32, all of Upper Dundonald Hill St James.

A short time before, police found a man dying from bullets wounds at Eastern Quarry, Port of Spain.

The victim, Daniel Thomas, 26, was pronounced dead at hospital.

The killings brought to at least 11 the number of homicides over the four day Easter weekend.

At least six other people were wounded in shootings.

The homicide rate for the year is at least 159.

Police Commissioner Gary Griffith is expected to speak on the spike in the murder rate when he addresses a briefing at Police Headquarters on Wednesday.

The St James shootings happened at around 10a.m.

Police were told that Vain and the others were sitting near his shop at Upper Dundonald Hill, when a white car pulled up.

A man in a jacket similar to “police operational wear” began shooting them men who ran.

Vain died at the scene.

Ashton was shot in the back and right arm.

Gonzales was shot in the groin and right leg.

They are in hospital.

In the other case, Belmont-based police officers found Thomas’ body on the road near his home.

Thomas, who was also known as ‘bike man’ had been shot in the chest, buttocks and arm.

The motives for the killings were not immediately established.