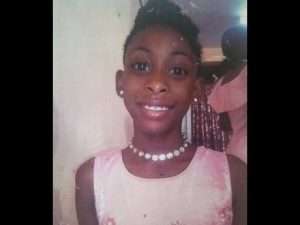 jamaicaobserver.com- A man was beaten and burnt beyond recognition in the community of Sterling Castle Heights Wednesday afternoon, allegedly in connection with the death of eight-year-old Shantae Skyers earlier this week.

The man, identified as Miguel Williams, was inside his house when an angry group forced its way in, beat him, placed used-car tyres around his body and lit him inside the building.

The victim’s mother, Charmaine Lee, who was too distraught to speak to reporters, was overheard saying, “It nah go so.”

Lee, who could hardly contain her emotions after looking at her son’s charred remains, was consoled by two other sons while members of the community stood aside and watched.

On Tuesday the police confirmed that the body of a child that was found in Sterling Castle Heights, St Andrew, was that of Shantae, who had gone missing on Thursday, April 11. She was a student of Red Hills Primary.

The constabulary’s Corporate Communications Unit, in a release, said Shantae’s body was found amongst rubble in an area known as Blue Hole by a search party led by the St Andrew North police.

The CCU said that since the little girl’s disappearance last Thursday the police, relatives, and community members had been searching several sites in the community without success. However, efforts to find her intensified when the Caribbean Search Centre, the police’s Canine Division and the Jamaica Defence Force joined the search.

In the meantime, two people who were taken in custody on Tuesday in connection with Shantae’s death were being questioned by detectives investigating the murder.

On Wednesday, state minister in the education ministry Alando Terrelonge, hours before Williams was attacked and killed, appealed to residents of Sterling Castle Heights to give information to the police that could help to bring the perpetrator(s) to justice.

Terrelonge, speaking at the media launch of Child Month at GraceKennedy Limited in downtown Kingston, expressed sadness at the child’s untimely death and urged residents to speak up about what they might have seen, to assist in getting justice for the little girl.

“Someone must see something; somebody must see the little girl while she was walking from school along that path to go home last week.

“Somebody must see something, whether somebody call, somebody tried to talk to her or hold her hand; somebody must see who was in the vicinity. I’m appealing to the residents of Sterling Castle to talk to the police, help the police to ensure that the person who killed young Shantae is brought to justice,” he urged.

The state minister, pointing out that Shantae could have become next prime minister or whatever else she had dreamt of, said, “It is time that we curb that monster of crime and stop the violence being committed against our children.”

He added: “They need our love and our protection and it must start in the home. We cannot speak about Child Month and not speak of irresponsible parenting that takes place every single day within our homes.

“The truth of the matter is that a nuh everybody fit fi be parents, and if you know sey that you not fit to be a parent, then don’t have no children, as responsible parents also include responsible birth control.”

Jamaicans, he said, must learn to make that bold step to protect the nation’s children as every day a child is born and every month is Child Month.

Dr Pauline Mullings, chairman of the National Child Month Committee, which is responsible for spearheading this year’s activities, also expressed sorrow at Shantae’s death and also the eight other children who have lost their lives because of violence since the start of the year.

Mullings, pointing to the theme for this year’s observation of Child Month, noted that while it is applicable to all children there will be an emphasis on children with disabilities.

“Some children are disadvantaged and are not treated equally due to cognitive, physical and social limitations, and we want our children to be encouraged in their capabilities, be enabled, equipped to make a difference, be included in the decision-making processes, and be factored in elements of life concerning, involving, and affecting,” she said.

Mullings further appealed to Jamaican parents, guardians and caregivers or anyone who influences or interacts with children to ensure that they are treated equally regardless of their socio-economic background, their abilities or lack thereof.

Guest speaker Senator Dr Floyd Morris, director, Centre for Disability Studies at The University of the West Indies, expressed concern about the number of children living with disabilities who are not included in the formal education system.

“… We have to find those children and make sure that they are included in the education system, because if we don’t include them what we are going to be having is intergenerational poverty that is continuously taking place in our country,” Senator Morris said.

He pledged to give his assistance, as director at the Centre for Disability Studies to find those children who are left out of the system.

He also urged parents and guardians of children living with disabilities to always encourage them and to ensure that they realise their dreams and achieve their fullest potential.

Among the highlights of Child Month, celebrated annually in May, will be a church service on May 4 at Kencot Seventh-day Adventist, National Children’s Day on May 17, and an Anti-bullying Day on May 3.

National Baking Company and Sagicor Foundation, which are among the sponsors of this year’s celebration, both handed over cheques for $600,000 and $100,000, respectively, to the committee.