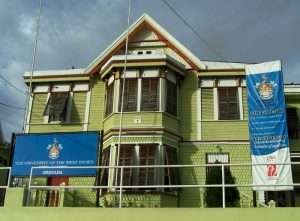 The Government of Grenada has been recognised by the University of the West Indies (UWI) as the best-paying island in the entire Caribbean, for student tuition.

Minister with responsibility for Tertiary Education, Skill Development and Education Outreach, Honourable Pamela Moses made the disclosure at the Post Cabinet Press Briefing on Wednesday.

Government pays in excess of $500,000 EC monthly to UWI as tuition costs for Grenadian students attending the institution whether at the physical campuses, online or through the Open Centre.

Minister Moses said, “We are so reliable with our payment that the university says it can depend on our payment every single month to cover its recurring bills. Government’s commitment to paying half a million dollars monthly is a clear indication that we are committed to providing opportunities for nationals to achieve tertiary level education. A better educated population will in the long run augur well for the overall development of our country.”

Minister Moses also disclosed Wednesday that Government covers 80% of the economic costs that students would normally pay to attend UWI. Students therefore only pay 20% of what the cost of their education at the UWI campuses would normally be.

As it relates to the UWI Open Campus, Government covers 40% of the cost of operation while the remaining 60% is covered through the tuition fees paid by students and other sources of revenue.

Minister Moses said, “Although the contribution to the Open Campus is less than what is given to the physical campuses, it still represents a cost savings for students using that option. Without that 40% contribution Government is making, students would have to pay much more.”

In other UWI related news, Minister Moses noted that further to UWI being named as the top university in the Caribbean, the institution which has campuses in three countries, was also listed in the top 5% of outstanding universities in the world.

An article posted on the UWI Mona Campus website last year stated that the institution made the Times Higher Education (THE) World University Rankings for the first time.

According to the article, “The rankings show that The UWI is located among the 1,258 top universities in world for 2019. This puts The UWI in the elite band of the top 5% of universities worldwide based on data showing that there are over 25,000 recognised universities, globally. Specifically, Times Higher Education ranked The UWI at 591 out of the 1,258 universities which made the list. The UWI is the only Caribbean institution on the world-wide list.”

Minister Moses said, “We have a regional institution of which we can be proud and the Government of Grenada will continue to support our nationals who use the University of the West Indies as their gateway to improving their academic qualification.”