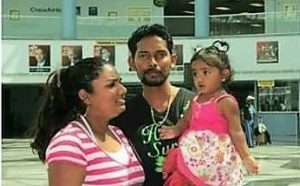 Trinidadexpress.com – Shalini Sookdeo-Choon was pregnant with her third child at the time her throat was cut, an autopsy found on Monday.

Sookdeo-Choon was five months pregnant, and would have given birth in August.

Instead she was killed along with her two children.

Their bodies were found in the family car parked roadside at Hambug Trace, Toco last Friday.

Her husband, Barry Choon, who sat in the driver’s seat of the car is suspected of killing his wife and two children, then himself.

Pathologist Dr Somo Gajala performed the autopsies on the family of four at the Forensic Sciences Centre.

The couple’s seven month old son, Jacob, had been smothered to death.

The autopsy on Choon was unable to conclusively determine if Choon slit his own throat, or if the wound was caused by someone else.

To his family, Choon was a kind and gentle man who loved his children more than life.

The 35 year old doubles vendor lived with his wife at his family’s home at Welcome Road, Cunupia.

Families of the couple said they are clueless as to what led to the killings.

A single funeral service is being planned for Barry Choon and his victims.