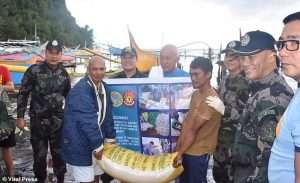 dailymail.co.uk – A fisherman hailed as an honest hero for handing in 34 bricks of cocaine worth £500,000 has been arrested on suspicion of keeping another six blocks of the drug.

Ronie Navales, 48, picked up the huge haul after noticing it off the coast of Surigao del Sur in the Philippines in February.

Police gave him £100 and a sack of rice as a reward for handing them over but became suspicious about reports of a new drug dealer in the local village.

Navales was investigated and police said last Friday he handed over four blocks each weighing roughly 1.3 kilos, claiming another two were flushed down the toilet.

‘Navales intentionally kept the six bricks of cocaine thinking he would gain bigger money by selling it to drug users.’

Police said Navales had violated Section 11 of Republic Act 9165 or the Comprehensive Dangerous Drugs Act of 2002 for illegal possession of drugs, an act that is punishable with life imprisonment.

Cruz added: ‘Let us not be blinded by the greed of money for it will only bring trouble to you and your family.

‘This serves as a warning to those who recovered bricks of cocaine and are planning not to surrender these to the authorities. You can never hide from the long arm of the law.’

A deckhand who was pictured receiving the reward with with Navales in February was not arrested.

Coastal towns on the eastern side of the Philippines have seen several instances of cocaine bricks floating in the sea in recent months.

Since February 10, a total of 228 kilos of cocaine worth 1.2 billion Philippine pesos have already been recovered.

Police believe they are originating from Papua New Guinea and the Solomon Islands or that smugglers are using them as decoys to get larger shipments through at different ports.

However, President Rodrigo Duterte claims a Colombian drug cartel in Medellin is responsible for the floating cocaine.