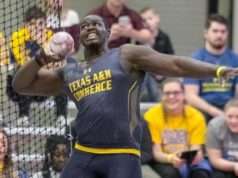 RICHARDSON – For the third consecutive week, Texas A&M University-Commerce’s Josh Boateng has been named the Lone Star Conference co-Field Athlete of the Week.

In the discus throw at the Angelo State David Noble Relays, Boateng (St. George’s, Grenada) continued to improve on his Division II-best mark, winning the event at 194-9 (59.37 meters). His launch broke the Grenadian national record by 2.45 meters. The previous record of his home nation had been set in 2004.

Boateng has improved on a nation-best mark in the discus in each of the last three weeks and also ranks in the top five nationally in the shot put.

Boateng and the Lions host the East Texas Invitational this Thursday and Friday.