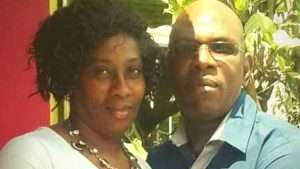 jamaicaobserver.com -DADDY, don’t kill Mommy” was the earnest cry of a 12-year-old girl when her father chased her mother and shot her before killing himself on Waltham Park Road yesterday.

Prior to beseeching her father, the girl had told her mother to run when she saw her father heading towards her with a gun.

Moments later she cried “Daddy kill Mommy” as she bolted along Woodpecker Avenue onto Willow Drive where her mother Rouleene Clarke-Gowans had been living since January, when she moved out of the matrimonial house in Portmore, St Catherine.

The child, who had been heading to a high school in Kingston when her father Patrick Gowans aborted his task to take her to school after he saw her mother along the roadway, feared the worst.

Her cries were not enough, neither was her strength when she tried to prevent him from killing her mother, days before her 13th birthday.

The subdued pre-teen gave bits and pieces of how the murder-suicide unfolded as relatives and representatives from her high school consoled her.

The couple who have been married for 15 years were both employed to the Department of Correctional Service as warders.

Rouleene’s father, Melford Clarke, who sat among the relatives, alleged that Gowans had threatened to kill his daughter and that he had told her to leave everything at their house and come home, which she did.

In fact, Clarke said he had gone to the Waterford Police Station and made a report.

Clarke explained that after he informed the police that Gowans had threatened to kill his daughter, Gowan’s firearm was seized.

The dead woman’s father said he was surprised that the gun had been returned to Gowans and questioned the reasons when a death threat was made. “How can you take out you gun, hold it on the mother and the daughter a say ‘Daddy don’t’ and you do it?” he mused.

Clarke said that minutes before his granddaughter had run back to the house to tell the family about the tragedy, he had been sitting outside when his daughter, otherwise known as Donna, told him “later” and left for work.

“Not even five minutes later I saw the car speed past, but I thought he was running late to drop off his daughter,” the grief-stricken father said as he sat on a chair on the verandah.

Clarke-Gowans’s older daughter, Shantae McDonald, told the Jamaica Observer that Gowans had previously attempted to kill her mother in the parking lot at South Camp Juvenile Correctional and Remand Centre for Girls on February 12.

However, his efforts had been thwarted when she raised an alarm.

The 24-year-old, who last spoke with her mother Tuesday night before she retired to bed, said the relationship between her mother and stepfather had become more toxic when she moved out of their home in late January.

According to McDonald, her mother was a jovial, honest and hard-working woman who stood up for herself.

“She came over (to my house) for my birthday on March 31, and we cooked Sunday dinner together and you know she was planning to come over my house [this] weekend and just spend the weekend with me. Up to last night she say she alright and she a go [to] her bed now because she has work a morning [but said] everything is OK with her,” McDonald said.

Clarke-Gowans’ stepmother, Evan Blake, said she was inside her house when she heard the deceased couple’s daughter shouting “Daddy kill Mommy!”

A teary-eyed Blake last spoke with Clarke-Gowans minutes before she had left for work yesterday morning.

“I was telling her that she was not going to see me when she come home because I was going to Manchester and she say ‘cool, cool Mandeville. I wish I was coming’,” Blake said, adding that she had met Clarke-gowans when she was only nine years old.

The constabulary’s Corporate Communication Unit reported that the murder-suicide involving the two warders occurred approximately 7:10 am.