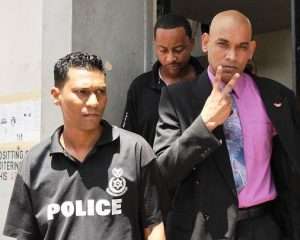 Trinidadexpress.com – Accused child killer Darwin Ghouralal is one of Trinidad and Tobago’s most wanted.

The police officer is supposed to stand trial for the 2011 murder of eight-year-old Daniel Guerra.

Ghouralal, a police detective who was regularly featured in the media capturing criminals during his 15 years of service, has been on the run for almost six years.

His colleagues have been mandated by a bench warrant from a High Court judge to arrest him.

Ghouralal had previously been in custody for Daniel’s murder, but was freed by a magistrate after a prelimi­nary enquiry in the San Fernando Magistrates’ Court cleared him of the charge.

After two and a half years in ­custody, he was released on September 17, 2013, following a five-minute hearing when Senior Magistrate Rajendra Rambachan threw out the case in upholding a no-case submission filed by Ghouralal’s attorneys, Sophia Chote and Michelle Solomon.

The defence attorneys claimed, in a 55-paragraph submission, the State’s evidence which linked Ghouralal to the killing of the Standard Two ­pupil of Gasparillo Government Primary was circumstantial, and asked the magistrate to draw inferences to determine a prima facie case was made out against Ghouralal.

However, the Office of the Director of Public Prosecutions went to the High Court, seeking to prosecute Ghouralal still.

And a month later, after a judge reviewed court depositions, a warrant was issued for Ghouralal’s re-arrest.

The warrant mandated that when Ghouralal is held, he is to be taken into custody to await a trial before a judge and jury.

But Ghouralal cannot be found.

After he walked out of the magistrates’ court that day, he disappeared.

The Express attempted, on several occasions, to contact Ghouralal in the days following his release, but he was not found.

Reporters called at his home at La Romaine several times, but no one answered his door, and neighbours said they did not see him return home.

Police officials say Ghouralal is believed to have absconded from Trini­dad, where he has a wife and two daughters, and has restarted his life in Canada.

However, because Canada does not have an extradition treaty with Trinidad and Tobago, his recapture may be stalled by bureaucracy.

And it is uncertain if anyone is ­actively looking for him.

Ghouralal last worked at the Mon Repos CID as a detective in the Southern Police Division. And when he first appeared in court, he was shielded by his colleagues from media cameras and the crowd of citizens wanting to see the man accused of killing the boy.

The charge read against him alleged he killed Daniel on a day unknown between February 17 and 21, 2011.

The child’s decomposing body was found near a river along Tarouba Link Road two days after he went missing after a trip to a parlour near his family’s home at Bedeau Street, Gasparillo.

He made it to the shop and was ­returning home with two drinks.

He was last seen by his uncle as he walked through a narrow track that led to the house he shared with his mother, Rona Indarsingh, in the village he grew up where his aunt, grandparents and other relatives were neighbours.

How the child was killed is shrouded in controversy.

The first autopsy performed at Forensic Science Centre by McDonald-Burris, and supervised by Alexandrov, concluded the cause of death was due to drowning.

A second autopsy by Daisley, at the San Fernando mortuary, found ­Guerra died from asphyxia before his body entered the river, which suggested he was strangled.

Gill, a US pathologist hired by then-attorney general Anand Ramlogan, performed the last autopsy at the San Fernando mortuary, which stated the cause of death was homicidal ­asphyxia.

In preparing his report, Gill went to the site where the child’s body was dumped and took water and dirt ­samples.

The case against Ghouralal began on November 5, 2011, and proceeded by way of paper committal, which involves the State filing witness statements and the defence calling those needed for cross-examination.

Daniel’s mother, who was friends with Ghouralal, was called to testify in the witness stand and she wailed when she was shown photographs of her son’s body and sketches of the area near where it resurfaced in a storm drain at Tarouba Link Road, near where the popular SouthPark mall was built.