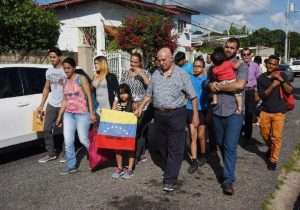 Trinidadexpress.com – Venezuelans, mostly women, are turning to sex for survival in the Caribbean, a spin-off group of the United Nations (UN) Refugee Agency and the International Organisation for Migrants (IOM), Response for Venezuelans (R4V), said in its latest report.

“Partners have observed growing vulnerabilities, with an increase in the number of persons in situations of risk or acute need. In this context, the risk of gender-based violence is aggravated. To the extent that the vulnerabilities increase, refugees and migrants from Venezuela become more susceptible to turn to negative means of survival, such as sex for survival, in the case of many women, as well as child labour and other forms of exploitation,” said Joint UNHCR-IOM special representative for Venezuelan refugees and migrants Eduardo Stein, in his Refugee and Migrant Response Plan (RMRP) for 2019, issued on April 3.

The RMRP and R4V’s Caribbean Situation Report: January-February 2019 also highlighted that 123 Venezuelan families in Trinidad and Tobago have been approved for cash grants from the UN Refugee benefactors, and that while there are an estimated 177,000 Venezuelans in the Caribbean now, that number is expected to rise to 222,000 by the end of this year.

The reports also signalled that 89 per cent of Venezuelan asylum seekers apply to T&T.

The R4V says it needs US$35 million to manage the Venezuelan migrant crisis in the Caribbean.

“Taking into account the small size and limited capacity for absorption by the countries affected, the growing number of refugees and migrants from Venezuela has had an impact on the communities receiving them. The concerns about the growing number of persons has led Caribbean countries to introduce restrictions on regular migration, such as changing the visa requirements for Venezuelans and issuing visas with shortened stays,” said the R4V.