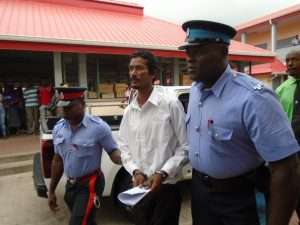 A St. Andrew resident charged with non-capital murder in the stabbing death of Leon Fletcher has been remanded to Her Majesty’s Prisons.

Fletcher, 46 years, also of Conference, was discovered close to his home, unresponsive, with multiple stab wounds to the body on Thursday 4th April, 2019. An autopsy revealed that he died as a result of hypovolemic shock.