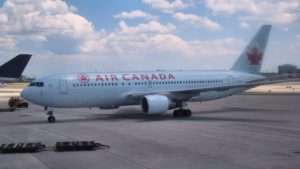 nationnews.com- A 94-year-old elderly German passenger, Heinrich Hamelbeck, went to the lavatory on board Air Canada flight number AC 1724, and did not return to his seat.

His 84-year-old wife who was accompanying him on the flight to Barbados, went in search of him after his delay in returning. There, in the lavatory, she found him unresponsive. He was pronounced dead, then cancelling the flight.

Police investigations are continuing according to Acting Inspector Rodney Inniss.