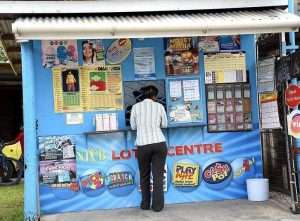 Trinidad – A 20-year-old student has more than ten million reasons to be happy.

The young man from east Trinidad was the Lotto Plus player who bought the winning jackpot ticket for the $10,245,770.54 prize when the Lotto Plus was drawn on March 6.

The student said he received the shock of his life when he checked the National Lotteries Control Board (NLCB) website and realised he was the winner.

He said he contained his excitement, telling only his father.

The winner said in a statement: “(It) still feels as though it’s a dream, but (I’m) excited and nervous at the same time.”

He said he is not a consistent Lotto Plus player and usually plays the Lotto Plus and Cash Pot based on “vibe”.

The vibe was on his side when he decided to stop off at DR’s Lotto Center at Eastern Main Road, Tunapuna and purchase his quick pick.

The student said he doesn’t have wishes of acquiring material possessions, saying he has “no dream car and is comfortable with any car that can take him from X to Y”.

Instead wants to donate a portion of his winnings to Down Syndrome and blind welfare charities.

The NLCB congratulated the newest winner on his success in Lotto Plus. (trinidadexpress.com)