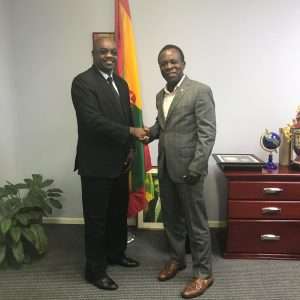 The Government of Grenada is being encouraged to forge ahead with anti-corruption efforts, especially since the country’s Integrity Commission is being hailed as a best practice.

Mr. Koranteng noted that the Prime Minister has been a long-time advocate of anticorruption initiatives. He recalled that even during his time in opposition, Dr. Mitchell voiced support for the establishment of the Office of the Integrity Commission and since being re-elected, has continued to demonstrate political support for stamping out corruption.

Dr. Koranteng said, “I commend you Dr. Mitchell for demonstrating the political will to support the Integrity Commission which has made tremendous progress since its establishment and is taking the lead in the region.”

Dr. Koranteng who recently won an international anti-corruption award, said it is unfortunate that Grenada’s anti-corruption efforts are not yet reflected in the Corruption Perception Index. Noting that data sets lag a couple years behind, Dr. Koranteng expressed optimism that the work being done would soon be reflected on the index.

The Prime Minister expressed full agreement with this view. He noted too that the research should go beyond the conclusion drawn from the data to give more credibility to the collection process.

He said, “We have passed many laws, created several initiatives and invested significant resources in anti-corruption but we cannot seem to get the credit for what has been done and continues to be done. It is unfair and unfortunate, but we will not be discouraged. What we are doing, is not merely for a score or a rating, it is for future of this country.”

He added, “We are doing everything to put the right systems in place, we have enacted the necessary legislation and we have also taken steps to ensure that we abide by it. We have gone very far with our anti-corruption efforts and we are proud.”

Dr. Mitchell thanked the Commonwealth for its role and said he looks forward to continuing engagement and the promotion of Grenada as a best practice.

Just last week, the Office of the Integrity Commission hosted a Senior Leadership and Management Training Programme, focusing on anti-corruption. In addition to local participants, there were representatives from some Caribbean countries including Dominica, St. Lucia, Guyana and Jamaica.