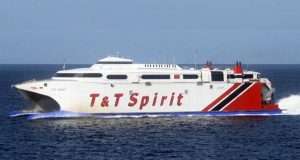 Trinidadexpress.com- PRISONER Matthew Woods has been sentenced to three months’ hard labour after his failed escape attempt from custody on Monday morning at the Scarborough Port.

Woods attempted to escape shortly before 6 a.m. while being escorted to the T&T Spirit inter-island vessel by prison officers, who were transferring him to prison in Trinidad.

Woods broke free and jumped into the sea, still handcuffed, but was quickly recaptured after the Spirit crew lowered a lifeboat and two prison ­officers got aboard and pulled Woods from the sea below the Scarborough jetty. He appeared before a Scarborough court later on Monday and pleaded guilty to the charge of escaping lawful custody.

Following the incident, passengers were allowed to board the vessel, which later left the Scarborough Port, destined for Trinidad.