Man Commits Murder After Being Teased With Explicit Language 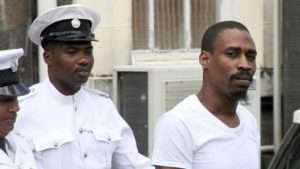 Trinidadexpress.com- A High Court judge has sentenced a man to 35 years in jail after he shot and killed another in broad daylight after being called a “pussy”.

Justice Brian Cottle imposed the sentence on 33-year-old Andy Quashie who will also serve 14 years in jail for possession of a firearm. The sentences will run concurrently.

A 12-member jury had found Quashie guilty on February 12 of the offences that were committed on September 1, 2012.

The court heard that Quashie, along with Billy Adams and Adolphus Foyle, were in Layou, a small town located on the west coast of the island, when they saw 35-year-old Joseph Evans “Tuffy” Lynch.

Lynch is reported to have referred to Quashie as a “pussy” and this remark upset Quashie and his friends, with Quashie and Adams leaving the area to get their firearms at home.

The court heard that on their return, they saw Lynch walking along the public road and Quashie shot and wounded him. As he lay on the ground, Quashie shot him again, killing him.

Justice Cottle said the incident occurred at high noon in the public road in the full view of many. Quashie then left the scene and surrendered the next day in the company of his legal counsel.

In mitigation, Quashie’s lawyer, Grant Connell, noted that on the date of the offence, his client was 27 years old, and though he had no previous conviction of that nature, he was “not exactly a virgin to the law”.