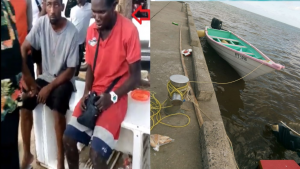 A visibly disoriented man was found in Grenada waters today. He is believed to be one of three fishermen from Tobago who went missing at sea since mid-March. The man, whose name was given as Rondel Kendall, was among a crowd of onlookers when he got to shore. Police later arrived and were seen assisting the man, who seemed too weak to walk on his own, into a police vehicle. He was taken to the general hospital for treatment, where he remains warded.

A second man was also said to have been aboard the small fishing boat when it arrived in Grenada, however, that information is yet to be confirmed by police. There has been no word on the third fisherman.

According to information coming out of Trinidad and Tobago, Rondel Kendall, Ronaldo Mosses, and another unnamed fisherman, all from Buccoo Tobago, went out to sea two weeks ago and never returned.

We will have more details for you as information becomes available.