Mikey Live
HomePrime Minister Excited And Confident About The Future Of Regional Cricket With...
Featured 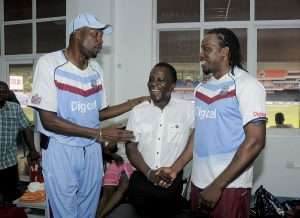 Prime Minister, Dr. the Right Honourable Keith Mitchell has expressed confidence and optimism about the future of regional cricket with the election of a new President and Vice-President of Cricket West Indies.

Speaking on the popular cricket talk show, Mason and Guest on Voice of Barbados, Dr. Mitchell reiterated his call for the modernisation of the administration of cricket in the region.

He is keenly anticipating the democratisation of the governance of Cricket West Indies and to see this filter down at all levels.

Dr. Mitchell said, “No leader wants to interfere with Cricket West Indies but we want to see what is best for cricketers, what is best for the sport in the region. People need to feel that they are part of the process and it is not just a few who are dictating the process. We want to see stronger democratisation at the board level; we have to modernise the approach to cricket in the region.”

Appearing on the programme with the newly elected President of Cricket West Indies, Ricky Skerritt, Dr. Mitchell encouraged greater involvement of players at the administrative level. “The whole question of how we involve our players is important. We should bring past players together and seek their advice in going forward; we should bring present players together and unify the team as much as possible,” he said.

Dr. Mitchell assured the new President of Grenada’s full support and suggested a collaborative approach going forward. “It has to be a partnership. I do not think any Government will refuse to invest in the development of cricket at the grassroots level because it will yield more results at the professional level. I am quite confident that Cricket West Indies will get serious support from regional leaders as they demonstrate commitment to change and investment in talent.”

Noting the importance of cricket as part of Caribbean culture, Dr. Mitchell spoke of a possible meeting between regional Heads of Government and the leadership of Cricket West Indies which he said Trinidad and Tobago is willing to host.