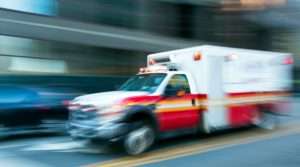 looptt.com – Vehicles operated by the Police Service, Fire Services, and even ambulances are not permitted to exceed the prescribed speed limits along the nation’s highways and in built-up areas.

Responding to a question posed to him at Thursday’s Post Cabinet media briefing, National Security Minister Stuart Young said these vehicles don’t have any right to speed.

His comment comes as investigations are currently underway by the Police Service into fatal road traffic accidents involving police officers.

Young said those caught speeding can be liable under civil law for negligence and under criminal law as manslaughter via vehicle can arise.

The Minister issued a call to members of the protective services and first responders alike to exercise caution on the nation’s roadways and abide by the relevant speed limits.

“I would like to use the opportunity to call on all of our response personnel, all of those men and women in the Police Service, in the Defence Force, in the Fire Services etc, drive cautiously, be aware that there are other users of the road including pedestrians and we have a responsibility to them as well.”

While the Motor Vehicles and Road Traffic (Amendment) (No 2) Act 14 of 2017 does not make specific mention of prescribed speed limits and variances as it relates to these vehicles, Works and Transport Minister Rohan Sinanan tells LoopTT that certain circumstances, particularly where emergencies are concerned, will dictate whether these vehicles have to go over the enforced speed limits.

“Under normal circumstances, when they are not in pursuit or responding to an emergency they should not be speeding. Certain circumstances will dictate that (increased speed).”

However, he said the matter was one for the Police Service to address.

He said citizens have a responsibility to clear the roadway for such vehicles as they would need to respond to an emergency quickly.

Failure to draw up a vehicle for passage of any engine or other apparatus of the Fire Service, Police Vehicles, Defence Force Vehicles or ambulances carries a fine of $1000 and three demerit points.