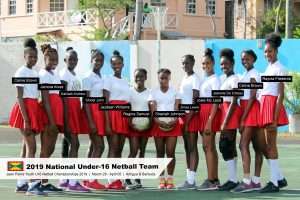 The Ministry of Youth Development, Sports, Culture, and the Arts announced the National Under-16 (U16) Netball Team to represent Grenada at the Caribbean Netball Association’s (CNA) 19th Jean Pierre Youth U16 Netball Championships to be held from March 28 to April 05 in Antigua and Barbuda.

The Spice Girls U16 squad has been preparing over the past weeks to compete against Antigua and Barbuda, Barbados, Bermuda, Dominica, St. Lucia, and Trinidad and Tobago. Their opening game will be against Barbados on Friday, March 29 at 7:15 p.m. (see fixtures below).