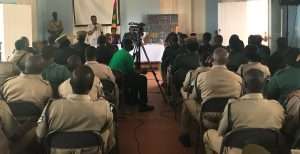 Prime Minister and Minister of National Security, Dr. the Right Honourable Keith Mitchell met with prison officers recently, providing them with an opportunity to have open and meaningful dialogue.

Dr. Mitchell welcomed the many new developments at the prisons including the addition of new staff, installation of surveillance cameras, firearms and other training for officers, new carpentry tools and improvements to the medical facility.

Dr. Mitchell said the prison should not be regarded simply as a place of punishment but one which prioritises the rehabilitation of inmates. He said, “The more activities we promote, the more skills we impart to inmates, there is a higher probability of them returning to society and contributing in positive ways to their own self development and that of their families and communities. We must concentrate heavily on rehabilitation.”

The Prime Minister cited discipline, appropriate behavior and management as critical factors that determine the success of any institution. “Persons who are in the position of management of the prison service must operate in a manner that promotes the successful operation of the prisons. Any Government department that tolerates misbehavior, incompetence, security breaches and corrupt practices is doing a disservice to the institution, the country and the taxpayers. We cannot tolerate lapses in security, pilferage and corrupt practices.”

The Prime Minister who also holds the portfolio of National Security, said persons who are not meeting the standards of the prisons cannot be allowed to remain. He also noted that 45 new officers have been added to the staff of the prison and reaffirmed Government’s commitment to security as a top priority.

On the subject of prison industry, Dr. Mitchell said the prison must become self-sufficient and warned against the misuse of resources. He said, “Government has invested significantly in the prison, we must ensure that it is properly managed for the benefit of inmates through increased rehabilitation opportunities. It is not right that the resources of the prisons be used for personal gain. Prison staff may benefit from what is produced but it must be done transparently and equitably.”

Prison officers attending the meeting with the Prime Minister shared concerns about some issues but also had useful recommendations on improvements that can be made to enhance the operation of the prison and to have a greater impact on the rehabilitation of inmates.