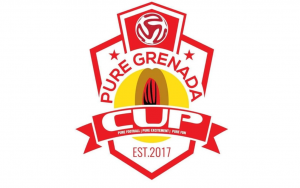 Eight teams are to participate in the GFA’s second annual Pure Grenada Cup beginning on the 6th of April.

Twenty three (23) different players will represent each of Grenada’s six parishes along with a team from Carriacou and now the under 23 Spice Boyz team.

The event which was considered as a failure last year has been rejuvenated with the partnership of now managing director of the cup Wayne “Waggy T” Redhead.

At the launch of the competition Mr. Redhead said that despite last year’s failure, they came together and decided to proceed. He adds “based on the success of the Waggy T Super Knockout I honestly believe that we are capable of turning around the Pure Grenada Cup.”

The committee has placed a $450,000 budget on the competition with $150,000 coming from the GFA and the rest from Mega force promotion. Waggy T says that “if your product is good, people will come out and play” as they have made major improvements to draw the public’s interest to the competition.

One of the changes of the competition will be the grouping of the 8 teams into two groups.

Each team will play 3 matches with the top 2 teams from each group playing in the semifinal. All the teams will receive $2500 dollars after each game played. There will be $60,000 to be shared amongst the top 3 teams with the winner to receive $30,000.

The cup will run for 6 weeks with games to be played at the national stadium, Cuthbert peters park, fond playing field, Victoria Park and a game in Carriacou.

The 2 opening games will feature Crown city Strikers vs St Johns Dolphins in group A and St. Andrew big parish stars vs St Mark western stars in group B. The opener will also see performances by the top 3 artists from the groovy section of the ISM in Trinidad. The price for admission is $20 dollars for bleachers and $25 for the main stand.

The finals will be on the 25th of May with a surprise Caribbean artiste performing.