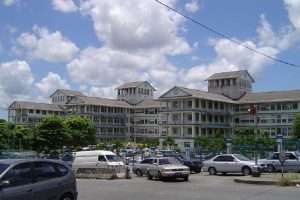 Trinidadexpress.com – A woman, who was set on fire during a caesarean section at the San Fernando General Hospital, has won her medical negligence lawsuit against the South-West Regional Health Authority (SWRHA).

Justice Ricky Rahim, presiding in the San Fernando High Court on Friday, found the SWRHA liable in the case of Anita Espinoza.

On October 24, 2016, Espinoza’s pregnancy was full term and she went to the SFGH and was admitted to the maternity ward for a caesarean section. A topical agent was administered to her skin in preparation for the procedure and, as customary, a screen was placed to block her view of the surgery.

In court documents, Espinoza said, “About a minute or so had elapsed when I heard one of the defendant’s agent and/or servant shout ‘fire’.

An incision had already been made on Espinoza who had to be administered oxygen as she began losing consciousness.

She was later told that those attending to her treated her burns and the procedure was completed. She said she has not seen any explanation for how the fire happened or what caused it.

The SWRHA admitted that there was a fire and Espinoza was burnt.

However, in its defence filed in May 2018, it said that in preparation for the procedure, the method was in accordance with the best practice and its staff members acted within the general skill and competence of other professional medical staff carrying out a similar procedure.

In her affidavit, Espinoza disagreed that the method followed was in accordance with best practice “as I don’t believe that best practice involves setting a patient on fire”.

In finding the SWRHA liable, Rahim ordered that damages and costs be assessed by a master of the court.